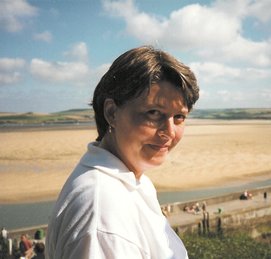 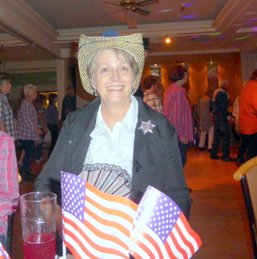 Welcome to the Golden Eagles Linedance Club, Andover. Our leader is called Debbie and she has been dancing since 1998, but only started teaching in September 2012.

We have two classes per week and we also attend social events with live music at Horndean, Burghclere, Whitchurch and Ecchinswell.

As a group we also go away on Linedance Weekends where we get to put into practice the dances we learn in class. We also have the chance to dress up if there is a theme night (as you can see from the above photo of Debbie as a Cowgirl).

For 2020 we have booked to go to The Cumberland Hotel Eastbourne, Merton Hotel Jersey, Queens Hotel Bournemouth.
We will be returning to the Royal Beach Hotel Southsea to see in the New Year again with Isle Of Wight (IOW) tours. This will be the sixth year we have seen the New Year in with IOW tours.

As a club we have a group of followers called the GOlden Eagles. (Yes that is right we dropped the G from Golden to call them the Olden eagles). This is made up of the partners that do not dance but enjoy the music and the social side of the Club. They can usually be found at the bar putting the world to rights!

Linedancing is not as you normally see it portrayed on TV with thumbs in the belt loops and a lot of thigh slapping with people dressed in cowboy outfits. It’s enjoyed by people of all ages, you don’t need a partner and we also dance to all genres of music from rock ‘n’ roll, to country and even music from the Charts. So, if you know your left from your right, then you can do it.

If you are in the area, pop in and visit us and join in the fun. We don’t take it too seriously and all you need to join in is a decent pair of shoes and a smile, although the smile is difficult when you are concentrating on the steps!